When the World Comes Tumbling Down


By now most everyone has seen the terrible images from central Italy, where a magnitude-6.2 earthquake struck in the middle of the night earlier this week. Small towns substantially damaged, hundreds of casualties, and many more wounded. While there have been some dramatic rescues, including a girl about 8 years old that was pulled out of rubble the day after the quake, at least 250 lives were lost. Compounding matters were the fact that the earthquake struck at night when most people were inside and sleeping, in buildings that were not specifically built to withstand this type of stress. Add to this the fact that at least one of the areas was busy with tourists, and this makes it difficult to accurately know how many people are still missing.

It is scenes like these that should cause people to take account, not only of all that they have, but of all that could be lost, from loved ones, to property, belongings, pets, if a sudden disaster were to strike without warning. It seems so distant when it comes to us via cable news from half way arount tha world, but events like this happen all too often. Right now there are wildfires burning out of control in California, incinerating homes and leaving virtually nothing behind.  There are floods devastating entire neighborhoods, and storms brewing in the Atlantic. All of these have, can, or will bring heartbreak and loss to hundreds or even thousands of people.  Yet there is only so much that can be done about it (and even less to prevent it).

In Italy, it is still very early on in the aftermath of the earthquake. I am sure there will be much discussion (and finger pointing) revolving around the construction methods, design, and engineering of the buildings that were destroyed. Hopefully, they can move past that point and quickly develop consensus on how these buildings will be repaired or replaced. Improved construction materials, methods, design, permitting and inspections can greatly impact the ability of structures to withstand whatever nature has in store.

No matter the type of disaster, there are things that can be done to increase your chances for survival. For example, you can carefully research and choose where you live. In insurance terms, this is called risk avoidance. Terrified of tremors? Don’t live on or near a fault. Have a fear of fires? Avoid wildfire-prone areas. Scared of cyclones? Don’t reside in areas known as “tornado alley”. Frightened of floods? Pick a home on elevated grounds and far from large bodies of water. Harried by hurricanes? Move far inland, but hopefully not near a fault line, tinder-dry canyon, low-lying riverbank, or tornado area.

Let’s face it, no matter we live, we face some risk of widespread damage by a catastrophic event. The next consideration is to accept the possibility of loss, but to take steps to reduce the potential impact on your way of life. The applicable insurance term for this is risk transfer. Typically, this involves buying the appropriate insurance, and thereby transferring the financial risk from you, to the insurance company.

Along the way, you can do other things, like being sure your home is built to withstand various calamities as best as you are able. If you live in areas prone to storms, spend a few extra dollars to have wind resistant windows installed.  If in a low-lying area, homes on raised pilings are a plus. And of course, homes built to withstand earthquakes would be preferred if you live in areas that periodically experience earth tremors.

And finally, you need to take steps to minimize loss of life. Besides the steps mentioned above, this would include anything from living in areas known for early warning systems, well planned escape routes, and responsible civil authorities, to developing your own plans for escape (which should certainly include heeding evacuation calls), communication, regrouping, and subsistence, as well as having a well built and well stocked basement or storm shelter. Plans for all types of disasters abound freely on the internet, so it would be senseless not to take advantage. 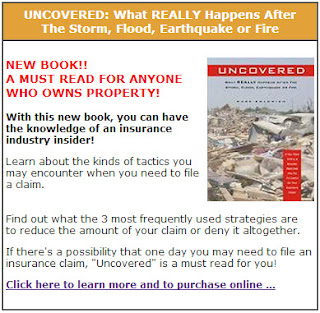 Fill out the form below to get a free copy of Mark's book.

Nobody can guarantee a life free of natural catastrophes, but there are plenty of things you can do to reduce the likelihood, degree of impact, and overall consequences, no matter what Mother Nature has in store for you. Please keep our friends in Italy, and in Louisiana, and Colorado, in your thoughts and prayers and be proactive before the world comes tumbling down around you.

Mark Goldwich is president of Gold Star Adjusters, a group of public insurance adjusters dedicated to helping citizens get the maximum settlement for any insurance claim.
at 12:18 PM