“Everyone talks about the weather, but no one does anything about it.”  At least that’s the way that Mark Twain saw it.  Here in Florida, as well as the Gulf Coast of the US at this time of year we do more than talk about the weather.  We fret over it, since hurricane season is once more upon us.  Beginning on June 1st and ending on November 30th, this six month time span is also known as the time when storm preparation can literally mean the difference between life and death.  Anywhere in between there can be expected a number of “Named Storms” including those containing hurricane force winds of 74 mph or greater. While the current hurricane season has been quiet thus far, NOAA is predicting a dozen named storms with half of these growing to hurricane strength.  It’s this sense of false security that lulls many people into being complacent when it comes to preparing for the worst.  As we all remember from a late season hurricane that ravaged the Northeast in October 2012 named Sandy, when it comes to hurricane preparation, talk is cheap.

Aside from high winds, hurricanes also deliver a tremendous amount of water in the form of rain and from coastal areas storm surge.  Dollar-for-dollar and ounce-for-ounce, more property is damaged and more lives are lost due to water than wind when it comes to major storms and hurricanes.  Storm surges can reach depths of 20 feet or more, flooding entire towns and even carrying away or battering down homes and businesses.  Hurricanes can also cause more than six inches of precipitation, which have been known to produce widespread flooding.   This, combined with winds high enough to bring down trees and power lines, means that if caught in a hurricane, you and yours could be left without power and clean water for days or even weeks.  So it is vital you create and establish an emergency plan that can help you and your family weather the storm.  And the time to create this plan is not when a hurricane is imminent.

Below is a list of items that every homeowner needs to consider this hurricane season:

Protection:  The last thing you want to do is be caught in the cattle call at the local big box store fighting for the last few pieces of plywood needed to protect your windows from wind damage.  Today, there are a number of ways to protect your doors and windows in the case of a major windstorm.  These include hurricane shutters, Storm Stoppers http://www.storm-stoppers.com/, Hurricane Fabric http://hurricanefabric.com/, accordion shutters, sliding and roll down screens and more. http://stormsmart.com/hurricane-protection/products/  Once installed, these systems are ready to deploy in the event of any major wind storm.  Many times insurance companies will even give homeowners that employ these devices a reduction on the windstorm protection portion of their policies.  (Check with your insurance agent to find out more.)  You should also invest in a number of large nylon tarps and ropes so that you can cover any roof damage that can be caused by wind and weather.  Unplug all non-essential appliances and turn your refrigerator to its coldest setting.  (Stock up on ice as well, since this can keep your food fresh for up to 72 hours provided you don’t open the fridge frequently or for long periods of time.)

Evacuation:  In the event that discretion becomes the better part of valor and you decide to evacuate your neighborhood due to a major storm, make sure you not only know the best evacuation route, but also pack enough provisions to enable you to get to where you are going.  Many times, highways turn into parking lots as the populace all try to get out of Dodge at once.  When this happens, traffic snarls are inevitable and many times gasoline will be unavailable at any price.  Bringing extra fuel along with food, water and even a tent is a good idea if you decide to evacuate.  Also, make sure you have a battery powered radio with you so you can receive updates on the continuing crisis.

Communication:  Once the power goes out so will most means of communications, including the Internet and cellphones.  Unless you have a backup generator, this also means that your television will go dark as well.  Make sure you have a battery powered radio on hand with a substantial supply of batteries.

Food and Water: Whether you choose to hunker down in your home or evacuate, you will need to eat and drink.  So make sure you have a substantial supply of potable water (1 gallon per person per day) and non-perishable food to last you several days (if you flee) or even several weeks (if you stay).  Just as with plywood, supermarket shelves will be quickly stripped bare in the event of a predicted hurricane.  So it is vital that you stock up on drinking water, canned goods, cereal, crackers, coffee, powdered milk, dehydrated soup and other foodstuffs well in advance of a panic.  You will also need something with which to cook on, such as a gas grill or camp stove.  If you remain home, you should also fill your bathtub and sinks with water before the hurricane hits, since clean water for cleaning and bathing could be hard to come by once the storm hits.

Emergency Medicine: Having a box of bandaids isn’t going to cut it in the event of an emergency.  Every family should invest in a prepackaged first aid kit that can handle everything from cuts and scrapes to broken bones and contusions.  Also, make sure that you have an adequate supply of any prescription medications you currently take.  It could be quite some time before you can go to the pharmacy.

Shelter and Power:  Once the storm has passed, you may find that your home is no longer habitable.  If that’s the case, having a tent or tents big enough for the entire family could prove to be a godsend.  Since power is one of the first things to go out and the last things to be replenished after a major storm, many people rely on auxiliary generators to provide power to their homes.  If you have purchased one of these, you need to ensure it is in proper working order long before storm warnings are issued.  You also need to make certain you have an ample supply of fuel and that you have extension cords long enough to enable you to position the unit far from your home.  (Generators have been involved in a number of fatalities from carbon monoxide poisoning.)

Insurance: Once again, proving that the last shall be first and the first shall be last, it is vital to your ability to recover from a major weather event that your insurance policies are current, comprehensive, and at-hand before the lights go out and the wind and rain starts to assail your property.

In short, if you live in any part of the country that is vulnerable to storms or flooding, preparing for the worst can be one of the best things you can do to keep you and your family safe and help you weather the storm.

Mark Goldwich is president of Gold Star Adjusters, a group of public insurance adjusters dedicated to helping citizens get the maximum settlement for any insurance claim. 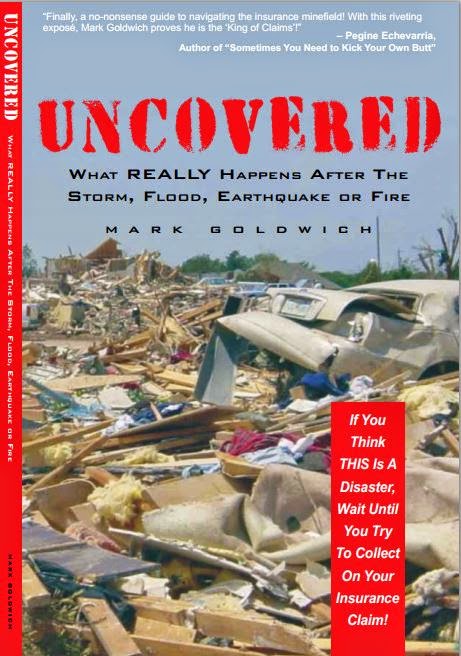 Pick up a copy of Mark's Newest Book at Amazon.com