Record Losses For All


The Weather Channel’s website, weather.com, recently published an article, “Eight Billion-Dollar Weather Disasters Have Hit the U.S. So Far in 2016”. The article noted this was only for the first 6 months of 2016, and that just one of the storms alone accounted for over 3.5 billion dollars of that damage. Also of note were the facts that 5 of the 8 weather disasters occurred in Texas, including 2 flooding events, and the damage totals did not even include late June flooding events in West Virginia. All told, at over 12 billion dollars, this could end up being the costliest January to June weather disaster period in recent history (it is already ranked #2, behind 2011’s tornado superoutbreak in April).

Now let’s try to break down who has to pay for all these damaging weather events, and how this could translate into insurance terms. First, remember that not all such losses are covered by insurance. Some properties are uninsurable, some properties are insurable but the owner chooses not to insure, can’t afford to insure, or decides to self-insure, and still others are insured, but not all the damages are covered by insurance. For example, if a 50-foot tall, 100 year old oak tree comes down in a storm, and does not land on covered property, there is no coverage for cutting up the tree and hauling it off of the property – and the bill for that could be thousands of dollars. Now, consider how many trees come down in all of these storms without landing on anything. As another example, flood insurance only covers certain types of buildings, and only up to certain limits (it is not like other types of property insurance where you purchase the amount of insurance you need).

So, out of the 12 billion dollars in damages, let’s say only 7 billion dollars are covered by insurance – that is still a great deal of money. Fortunately, the insurance companies have that money sitting in reserves, collecting more interest than you or I can get. And, let’s not forget that just because the damages are covered by insurance, and the policies are in place, and the premiums are paid, that doesn’t mean the insurance companies are going to willfully pay that money to their insureds, who have now crossed the line from (pre-loss) “customers”, to (post-loss) “legal and financial adversaries”.

Care to guess how much I would predict insurance companies would offer premium paying customers with covered losses, if the covered damages were actually 7 billion dollars? Don’t read ahead. Just think about it for a minute before scrolling down. Don’t peek! If they owe 7 billion, how much would they pay without question? Should be 7 billion, right? OK, maybe they try to hold back a little – after all, some people probably try to inflate their claims, and mistakes happen, but they would probably pay at least 5 billion, don’t you think?

Well, I don’t. My experience tells me they would try to pay a mere 1.75 billion dollars of the 7 billion dollars owed. Good thing we’re a litigious society, with tons of lawyers at our disposal, and we won’t let anyone take advantage of us like that, huh? Don’t count on it. Accounting for the small percentage of policyholders that would fight their claims – either on their own, or with the help of a professional public adjuster or attorney – I would doubt the figure would rise above 2 billion dollars. That makes for a nice additional profit of about 5 billion dollars on covered losses owed, but not paid.

Why do I think the insurance companies would offer so little? That would be based on my own experience, supported by a governmental agency, the Florida Office of Program Policy Analysis and Government Accountability that published a report in January 2010, which showed insurance payments were up to 747% higher when policyholders were represented by public adjusters for claims related to hurricanes (catastrophes). This report supports my own experience when dealing with insurance claims, and especially when dealing with catastrophe claims. 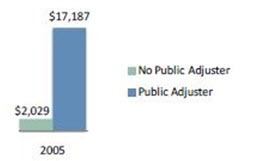 Consider these two examples of actual claims I handled recently:
In one case, an insured was paid just over $2,600 for damage to his roof from a storm. The insurance company acknowledged that about 50% of the insured’s roof needed to be replaced due to a covered wind event, but decided not to pay to replace the entire roof as was required by building code (and the insured had the proper endorsement to address this). I thought it would be a simple matter of letting the insurance company know of their mistake. Instead of quickly paying the correct amount, an adjuster blustered about the amount I had estimated, misrepresenting a number of facts about the size of the roof and the cost of the repairs. It took a few months to get someone else involved that agreed the prior adjuster did not respond properly, and an additional $7,750 was paid, on top of the $2,600 initially paid.

In another case, a woman had a pipe leak inside a wall between her bathroom and laundry room, damaging some drywall, a vanity, floor tiles, and some of her daughter’s shoes. The insurance company adjuster was very difficult with her, suggesting the leak must have been occurring for an extended period of time, and questioning the insured about some items that were completely unrelated to the claim. She said she could tell there was going to be a problem within just a few minutes of him entering her home. Sure enough, she soon received a letter denying the claim altogether. She then hired me, and I recently met with another adjuster, who agreed to pay for the damages, totaling over $6,000.

Keep in mind these are small losses, not resulting from major weather catastrophes, yet the amounts the insurance companies were attempting to avoid paying were relatively significant for such small claims. If you consider the hundreds of thousands of claims that would have been filed for the weather related catastrophes in the first 6 months of 2016, and have confidence as I do in the amounts that could be recovered with professional representation, you can begin to see why I believe the insurance companies could be avoiding as much as 5 billion dollars or more in covered claim payments.

Yes, the insurance industry might be making record payments on record numbers of weather disasters, but their insureds are also suffering record losses as well. The difference is, the insureds paid their full premiums with their hard-earned money, and don’t have the 5 billion dollars I believe is being shorted, and the insurance companies do have the money. The insureds who refuse to settle for less than everything they are owed are fully compensated – I hope that includes you.

Mark Goldwich is president of Gold Star Adjusters, a group of public insurance adjusters dedicated to helping citizens get the maximum settlement for any insurance claim.
at 7:51 AM